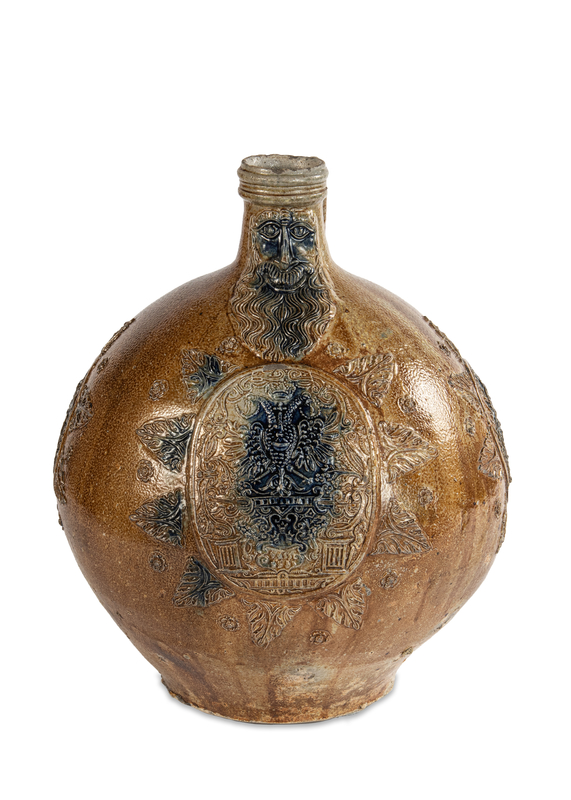 This finely decorated Bartmann-type jug in mint condition, with its characteristically grey body covered in a light brown slip, is made at Frechen/ München around 1600. The conical neck bears a fine, smiling example of the characteristic bearded figure or bartmann mask. On the belly of the spherical jar, underneath the mask, is an oval shaped relief with a double-headed Royal eagle with imperial orb and crown but without scepter, surrounded by acanthus leaf and flower rosettes. It is flanked, left and right, by a relief with the coat of arms of England, possibly the weapon of Henry VIII. The decorations in relief and the bartmann mask are coloured blue with either saffer (the blue dye smalt) or cobalt, making them stand out and adding a special feature to this charming jug.

Coats of arms were a frequent element in the relief-decoration of early modern stoneware, just like the current one of England, possibly the weapon of Henry VIII, and the symbol of a double-headed Royal eagle with imperial orb and crown on this bearded man jug. They often represented either the dominion of the pottery production site or of the proposed distribution area, to appeal to the citizens of cities where the bottles were marketed, in this case England.

This bearded man jug was likely mainly a beer pitcher. Taking medieval drinking habits into consideration, it is highly probable that the beverages the jug served were alcoholic of nature, mostly beer or (perhaps) wine, rather than water, juice or milk. Water in most medieval towns was of rather poor quality and fresh milk and fruit juice were not easily available in an urban context. The large size of the present bearded man jug, common since the end of the sixteenth century, indicates it was a
stock jar and the function of it was to pour alcoholic beverages into smaller, drinking vessels. They frequently appear in Dutch old master paintings from the seventeenth century, mostly in an inn-like setting. The bearded man usually stands on the floor or on a table, at least within reach of the drinker serving himself from the pitcher. Wine or beer was ordered by pitcher or jug and they were tapped from the barrel. Jars thus serve as a personal storage jar between the barrel and the glass. This was different from the earlier types, the jugs from the first half of the sixteenth century. They were smaller and sometimes also had a wide neck which made them suitable for drinking immediately.

Bartmann or bearded man (also known as Brown Frechen or Bellarmine) jugs were in great demand in Europe since the middle ages. In the high temperature needed to fire this specific pottery, the elements of the clay ‘melted’ together, making the fabric stone hard and completely watertight. Such stoneware was therefore excellently suited as a container or tableware for liquids.

They were made in Germany from 1500-1770, originally produced in Cologne but shortly after in more places in the Rhineland, notably Cologne, Frechen, Langerwehe, Raeren and Westerwald. These areas had the perfect natural resources necessary for the development of the pottery industry such as fine, clean clay deposits for stoneware fabric, thick forests to supply the huge amount of wood needed to fuel the high-temperature kilns, and plentiful salt to create the ornamental glaze.

The colors of the lovely bearded man jug are a direct result of the clays used and the baking process. The basic medium grey colored fabric clay consists of the clean, fine-grained, high-silicate clays present in the beds near the Rhine River. That clay was optimal for stoneware pottery. When fired at extremely high temperatures (around 1300 degrees Celsius), the specific composition would, unlike unsuitable clay, not deform or melt away, but would ‘sinter’ (melt to a certain extent so that clay particles unify) to form a hard, impermeable stoneware. The presence in the clay of approximately 2% iron salts would also create the distinctive speckled effect.

The warm brown color is the result of metal oxides in the engobe or clay paste. The potters poured or dipped the unbaked jar into an engobe to embellish the color of the baking. The beautiful transparent glaze was applied simple and efficiently by throwing damp sea salt (sodium chloride) into the kiln when the oven temperature was at its highest. The chlorine in the salt would vaporize in the heat and the sodium reacted chemically with the silica in the clay, forming an evenly mineral film with a pitted, orange-peel texture. Since stoneware is already waterproof in itself this glazing was a purely aesthetic affair. It was also during the salt-glazing process that the bright blue splashes on the surface of the molded decorations would be added. It probably is either the color cobalt, a metallic element most commonly applied in the Rhenish stoneware industry, or saffer (the blue dye smalt).

The relief decorations were made with help of a mould. The negative ceramic moulds were filled with a thin layer of fine clay. The clay slice decorations would be attached to the neck or belly of the jug with the help of clay paste, after which it was baked. At about as early as the end of the 15th century, the use of moulds allowed various pottery workshops in towns in the Rhine-area to produce quite detailed and elaborated decorations in a standardized matter on products that were mass-produced in large workshops. This technique was probably inspired by contemporary developments in printing technologies. Also, the motives on the pottery generally clearly show that the makers of the moulds were familiar with contemporary print with decorative examples that were often the original models for the relief decorations.  Although many of these jugs were mass-produced in the middle ages, to find one today in such a well preserved and non-restored state is a very rare occurrence. 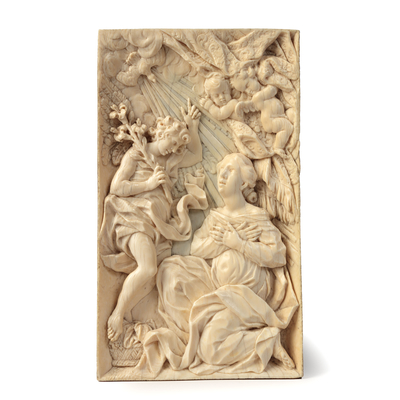 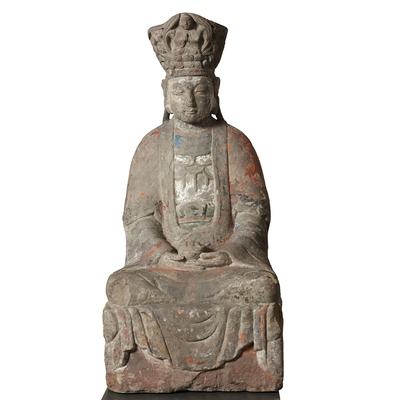