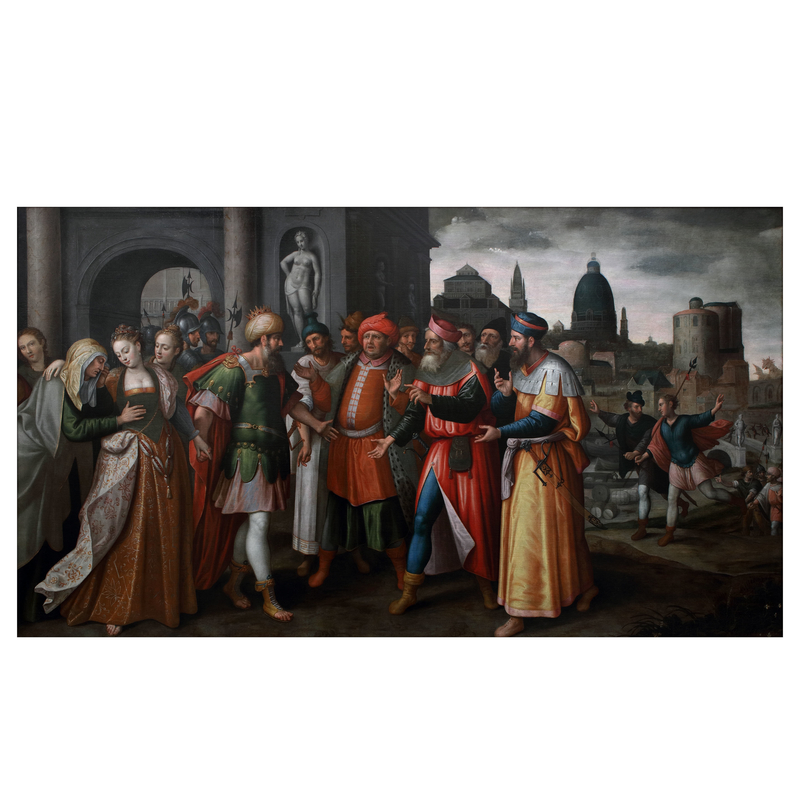 Antwerp School, 'The Legend Of Saint George and the Dragon'

An episode from the legend of George and the Dragon is depicted on a large canvas. This episode is not often represented in art. Traditionally, George is portrayed with the dragon he had reputedly killed. The imagination of George and the dragon was popular in the Middle Ages and in the succeeding ages because the dragon was seen as a symbol of paganism. The defeat of the dragon symbolizes the conversion of a pagan land or city to Christianity.

Because the original story was lost, elements from ancient myths were integrated in it. The story has similarities with the tales of Perseus. In the Legenda Aurea from the 13th century the story is told for the first time. It is situated in Silena in Libia. Other sources mention Beirut.

The city was controlled by a dragon. Every day he was given two sheep to be soothed. When the last sheep had been offered, the dragon demanded human sacrifices. Fate picked the king's daughter. Dressed in her bridal gown she faced death. However, George attacked the dragon with his spear and wounded the beast. He promised the king and the people that he would kill the animal on the condition that everybody would be baptised by him. When the king and the people agreed to this he killed the dragon and on that day 15.000 people were baptised.

The devotion of Saint George was wide-spread in all parts of the Western world. He became the emblem of countries and regions in Europe, such as England, Portugal, Catalonia and Aragon. Sain George is a versatile figure who also was the patron saint of various guilds, organisations and several European cities that were placed under his protection. Therefore, he was depicted frequently as can be seen in the large European Museums.

However, this representation of the moment that precedes the defeat of the dragon, the dramatic moment when fate decided that the daughter of the king should be offered, is hardly depicted.

The painting may be placed in the tradition of the large figural pieces made in Antwerp around 1590. Following the large market pieces by Aertsen and Beuckelaer, masters such as Jean Baptiste Saive and Adriaen van Utrecht started to produce enormous paintings with full-sized figures. The artist of the current painting was clearly influenced by Antwerp painters such as Frans Florius and Ambrosius Francken the Older and the italianate style of Jan van der Straet. The Italian influence of the subject and painting is obviously connected to the painting 'The triumph of George'  by Vittore Carpaccio from Venice. On this painting too, an unusual episode from the legend of Saint George is depicted using large figures on an enormous canvas. The painting is most certainly connected to the large production of tapistries in the Southern Netherlands. Considering its size and subject, it fits in the tradition of the depiction of cycles of tales.

Around 1575 Michiel Coxie painted a large triptych devoted to Saint George and that was intended for the chapel of the Antwerp guild 'the Young Crossbow' in the Onze Lieve Vrouwekerk. This triptych is an example of a commission by a guild for a thematical representation of Saint George. In general we can assume that the guilds provided a continuous flow of commissions of paintings devoted to Saint George. The dragon slaughterer was the favourite patron of various archers' guilds. The guilds wanted to have pictures of Saint George slaying the dragon in their chapels and guild's quarters. This heroic deed was thus depicted frequently. In this light we should consider this painting that due to its size would not have been intended for a private home. In a cyclus with paintings of Saint George and the dragon this painting would have been perfect for a guild's room.

GIlles Coignet painted an intriguing panel for the guild's chambers of the Young Crossbow in 1581. The large painting is inspired by Venetian examples and a remarkable feat is the naked princess, as she is ususally dressed in her bridal gown. It shows that the guild was open for experiment and the current painting with the the episode of the king's daughter from the legend of Saint George may well have been produced for a guild chamber such as that of the Young Archers in Antwerp.

For the attribution works by Otto van Veen, Ambrosius Francken, Marten Pepijn, Gilles Coignet, Michiel Coxie and Artus Wolfort are reviewed. All of these masters made large-sized historical paintings, yet none have enough similarities to the current painting to justify an attribution. The work is of extraordinary quality and would not have been painted by a small master. Unfortunately, it is still unknown who the maker is. 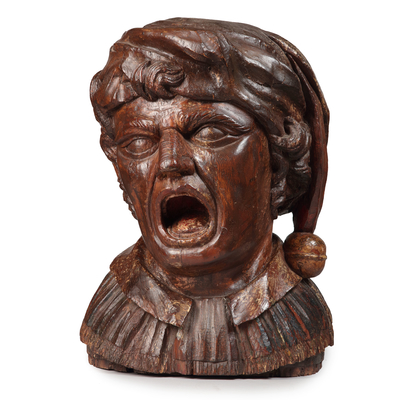 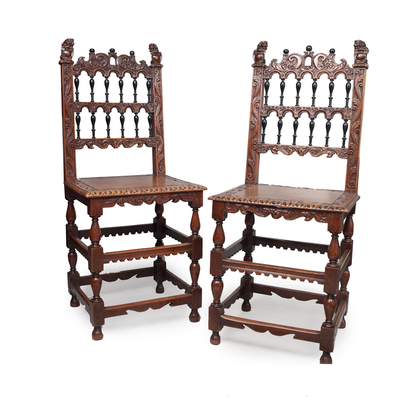 A pair of Spanish chairs